Disclaimer:  I am not a licensed shitty-driver-teacher, just a practitioner.  I don’t actually recommend my recommendations.  Don’t try this at home, kids.

I used to be a fairly by-the-books driver.  I’ve always had a lead foot, but after getting a ticket even Donald Trump would shrink from (I was going 90 in a 60, what?), I’ve been pretty good about employing the powers of cruise control to keep myself in check.  This is especially helpful in those blasted 25 mph zones.  I mean, seriously, my car idles faster than that.  But I digress.

As I was saying, I used to be an obedient driver.  That is, until I started commuting 45 minutes to work.  Every day.  Each way.  For some, that may not seem like a lot.  But, trust me, it sucks.

Over the course of a year of commuting, I have slowly evolved (or is it devolved) into one of those drivers, the kind I used to despise.  A close-riding, lane-cutting, last-minute-merging driver.  I’m sure everyone else on the road hates me, but I’m laughing all the way to work while they’re getting smaller and smaller in my rear-view mirror. 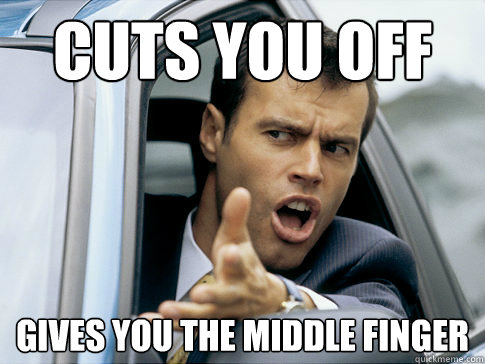 Yeah, that would be me

So how can you, too, become a shitty driver, you ask?  Well, you’re in luck, because I’ve outlined it for you in 10 easy steps.

Step 1:  Leave your house at least 10 minutes later than the latest you absolutely must leave.  Whether it’s because you woke up late, needed that second or fourth cup of coffee, or have a herd of cats to feed, be sure to waste precious time in the morning so that you have no choice but to speed all the way to work.

Step 2:  Ride the tail of every car between you and your destination.  Those stupid drivers probably allotted a rational amount of time to get to where they are going.  They wouldn’t understand your need for speed.  Get as close to their car as possible without actually touching their car.  This is key.  You don’t want to touch their car because then you will have to stop and exchange information and then you’ll really be late to work.

Step 3:  If for some reason they refuse to get out of your way, pass them.  You must time this just right so you don’t get stuck in the middle lane (see Step 5).  Watch for a break in the traffic so you can whip around them without too much effort.  When that moment comes, gun it!  You want them to hear your engine roar so they will understand the full power of your fury.

Step 4:  Don’t allow anyone to ride your tail.  That’s just rude.  If someone else has the audacity to think they are in a bigger hurry than you (hooker, please), then you must show them who’s boss.  Yes, this might make you later to work, but the important thing is that you keep the upper hand at all times.  The best way to do this is not to slam on your brakes (rookie mistake).  That usually just makes them think they can get in a battle of the wits with you.  It is much better to gradually decrease your speed by simply lifting your foot off the gas.  It will take them a few seconds to realize what is going on, and they’ll be confused because they didn’t see your brake lights.  They will likely not know what to do except try to pass you.

Step 5:  DON’T LET THEM PASS YOU!  Then they would win!  As soon as they are fully in the next lane, speed up and get as close as you can to the car in front of you.  Then, when they get back behind you because the middle lane is slower than the left (idiot), gradually decrease your speed again.  This will really piss them off.  It’s funny.

Step 6:  Wait until the last possible moment to merge.  Ignore those pesky construction or lane-ending signs.  They mean nothing to a shitty driver like yourself.  You spit on them!  You must wait until you can see the end of the road, until it almost seems you won’t make it, before merging into the slower, proper lane.  Don’t forget to laugh at all the rule-followers as you pass.

Step 7:  Merging… okay, this is an advanced commuter secret, so listen up.  If you turn on your blinker too early, they will know that you intend to cut them off and will try to speed up.  Don’t make this mistake!  Also, depending on the circumstances, you may actually need to slow down a bit before merging.  Too much speed can also be an indicator of your intention to cut in.  Keep your cool and watch the other lane.  When you see a good break in traffic, slam on the gas and get in place, then tap your blinker a split second before actually merging.  They won’t know what hit them!  (And hopefully they won’t hit you).

Step 8:  Occasionally, drivers will get a little testy at you for cutting them off or riding their tail, and they’ll drive up next to you to stare you down.  Don’t look at them!  This will be like admitting you did something wrong.  Don’t give them the satisfaction.  Instead, look intently ahead like you’re concentrating on the traffic, or fiddle with your radio, or finish applying your make-up.  Just don’t let them know you see them.

Step 9:  However, if someone ticks you off, totally drive up next to them and stare them down.  Most won’t know Step 8 and will look at you.  Don’t be overly expressive; rather, pull all of your anger and superiority and beam it at them through your eyes.

Step 10:  Develop your arsenal of insults.  The weirder and more vulgar, the better.  Scream at them that you’re going to make their mother bleep a bleep and then bleep them with a bleeping bleep, bleep-it.*  But don’t actually get mad.  Have fun with it!  If you get mad at all the stupid drivers taking up precious space on the road, you will lose your ever-loving mind.  Instead, come up with the most ridiculous tirades imaginable, scream them at the top of your lungs, and ride that a-hole’s tail!  It’s like a game, only dangerous!

*Sorry, I cannot share my insults with you.  First of all, they are so brilliantly honed, I am trying to find a way to patent them.  Secondly, my mom reads this blog.  Sorry, mom!

6 thoughts on “10 Steps To Being A Shitty Driver”